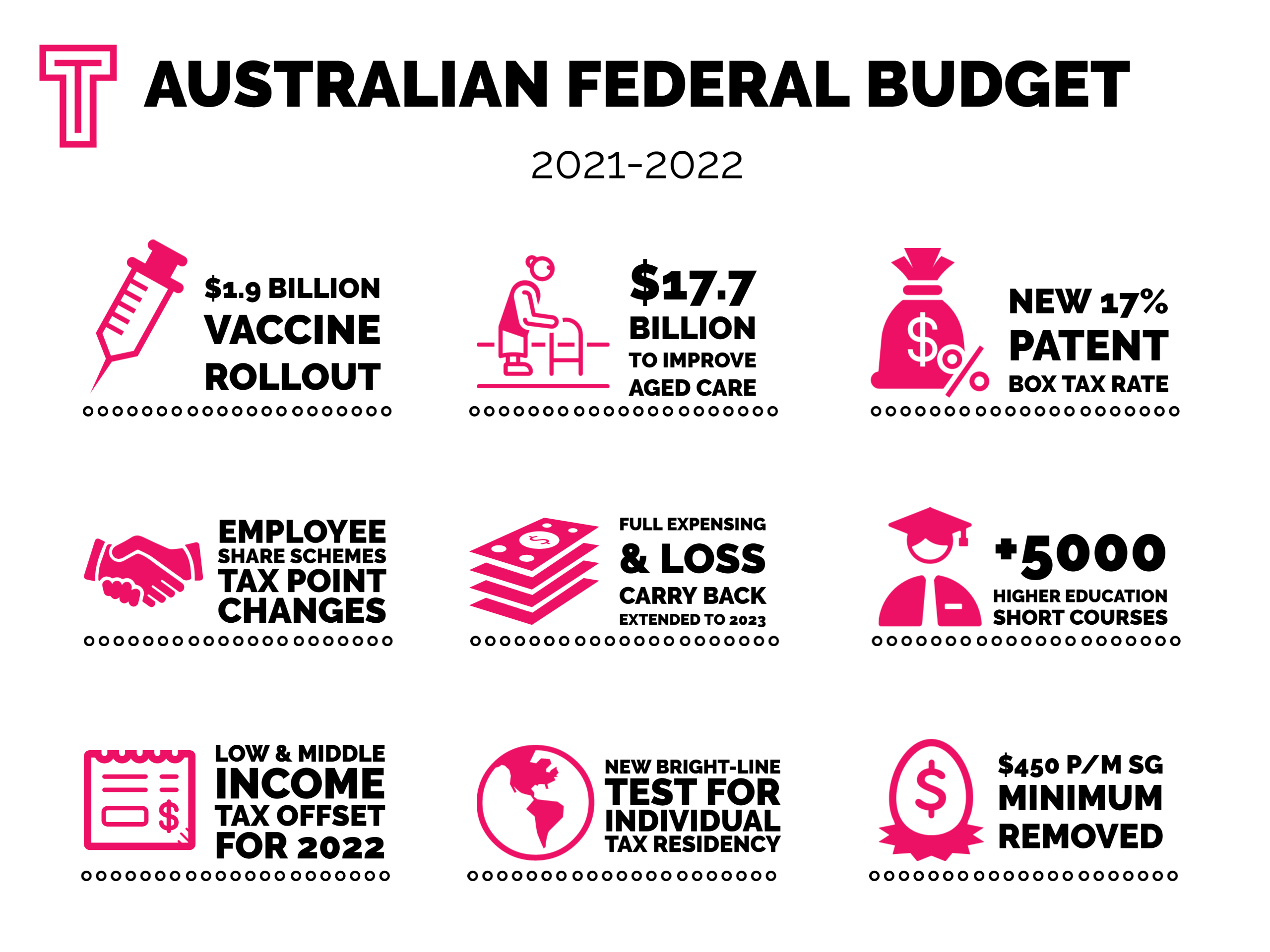 The Government has decided not to go down the austerity path, which will be a relief for many taxpayers and businesses.

Rather, the Government has decided to put its foot on the accelerator with the hope that the growth in the economy over a long period of time will help to pay down the debt that has been central to the Government’s response to COVID-19.

On personal taxation, in an expected announcement, the Government confirmed that it will extend the low and middle income tax offset (LMITO) beyond 2020-21 so that taxpayers will continue to receive the tax offset (between $255 and $1,080) in the 2021-22 income year.

In summary, the major tax-related measures announced in the Budget included:

The key superannuation and related measures announced in the Budget include:

At the same time, the Budget did not contain any change to the legislated Super Guarantee rate increase from 9.5% to 10% for 2021-22.

As previously announced, the Budget confirmed:

The Government believes the 2021-22 Budget will consolidate the gains made since the last Budget in October 2020 and put the economy on course for the unemployment rate to fall below 5%. To reach these targets the Government has committed $291 billion (or 14.7% of GDP) in direct economic support for individuals, households and businesses since the onset of COVID-19. Some of the measures mentioned above are fleshed out below.

The Government announced in the Budget that the low and middle income tax offset (LMITO) will continue to apply for the 2021-22 income year. Otherwise, the LMITO was legislated to only apply until the end of the 2020-21 income year, with the result that low-to-middle income earners would have seen their tax refunds in 2022 cut by between $255 and $1,080 (for incomes up to $90,000 but phasing out up to $126,000).

Consistent with current arrangements, the LMITO will be received on assessment after individuals lodge their tax returns for the 2021-22 income year.

The Government will replace the existing tests for the tax residency of individuals with a primary "bright line" test under which a person who is physically present in Australia for 183 days or more in any income year will be an Australian tax resident.

Individuals who do not meet the primary test will be subject to secondary tests that depend on a combination of physical presence and measurable, objective criteria.

The increased thresholds will apply to the 2020-21 and later income years.

The Budget confirmed that the Government will make an additional $1.7 billion investment in child care. The changes will commence on 1 July 2022 (ie not in the next financial year).

Commencing on 1 July 2022, the Government will:

The Treasurer states that, under the Government's changes, a single parent on $65,500 with two children in five days of long day care who chooses to work a fifth day will be $71 a week better off compared to the current system. He further states that, under these changes, a family earning $110,000 a year will have the subsidy for their second child increase from 72% to 95%, and would be $95 per week better off for 4 days of care.

The Government will extend the temporary full expensing measure until 30 June 2023. It was otherwise due to finish on 30 June 2022.

The Government will extend the eligible tax loss years to include the 2022-23 income year. Tax refunds resulting from loss carry back will be available to companies when they lodge their 2020-21, 2021-22 and now 2022-23 tax returns.

This will help increase cash flow for businesses in future years and support companies that were profitable and paying tax but find themselves in a loss position as a result of the COVID-19 pandemic. Temporary loss carry-back also complements the temporary full expensing measure by allowing more companies to take advantage of expensing, while it is available.

The Budget confirmed that the income tax law will be amended to allow taxpayers to self-assess the effective life of certain intangible assets (such as intellectual property and in-house software), rather than being required to use the effective life currently prescribed.

This amendment will apply to patents, registered designs, copyrights and in-house software for tax purposes. Taxpayers will be able to bring deductions forward if they self-assess the assets as having a shorter effective life to the statutory life.

The self-assessment of effective lives will apply to eligible assets acquired following the completion of temporary full expensing (introduced in the 2020-21 Budget — ie to assets acquired from 1 July 2023).

In the 2020-21 Budget, the Government announced that it would amend the law to provide that a company that is incorporated offshore will be treated as an Australian tax resident if it has a "significant economic connection to Australia". This test will be satisfied where both the company's core commercial activities are undertaken in Australia and its central management and control is in Australia.

The Government has now announced that it will consult on broadening this amendment to trusts and corporate limited partnerships. The Government will seek industry's views as part of the consultation on the original corporate residency amendment.

The amendments, as they affect companies incorporated offshore, will have effect from the first income year after the date the enabling legislation receives assent, but taxpayers will have the option of applying the new law from 15 March 2017 (the date on which the ATO withdrew an earlier ruling). It not known whether the same arrangements will apply for the start date for trusts and corporate limited partnerships should they be brought under the new rules.

The Government will introduce legislation to allow small businesses to pause or modify ATO debt recovery action where the debt is being disputed in the AAT. Specifically, the changes will allow the Small Business Taxation Division of the AAT to pause or modify any ATO debt recovery actions – such as garnishee notices and the recovery of GIC or related penalties – until the underlying dispute is resolved by the AAT. This measure is intended to provide an "avenue" for small businesses to ensure they are not required to start paying a disputed debt until the matter has been determined by the AAT.

Small business entities (including individuals carrying on a business) with an aggregated turnover of less than $10 million per year will be eligible to use the option. The AAT will be required to "have regard to the integrity of the tax system" in deciding whether to pause or modify the ATO's debt recovery actions.

The superannuation contributions work test exemption will be repealed for voluntary non-concessional and salary sacrificed contributions for those aged 67 to 74 from 1 July 2022.

As a result, individuals under age 75 will be allowed to make or receive non-concessional (including under the bring-forward rule) or salary sacrifice contributions from 1 July 2022 without meeting the work test, subject to existing contribution caps. However, individuals aged 67 to 74 years will still have to meet the work test to make personal deductible contributions.

Currently, individuals aged 67 to 74 years (ie under 75) can only make voluntary contributions (both concessional and non-concessional), or receive contributions from their spouse, if they work at least 40 hours in any 30-day period in the financial year in which the contributions are made (the "work test"). Note that the work test age threshold was increased from 65 to 67 from 1 July 2020 as part of the 2019-20 Budget.

The measure will have effect from the start of the first financial year after Royal Assent of the enabling legislation, which the Government expects to have occurred prior to 1 July 2022.

The Government confirmed that individuals under age 75 will be able to access the non-concessional bring forward arrangement (ie three times the annual non-concessional cap over three years), subject to meeting the relevant eligibility criteria. However, note that the Government is still yet to legislate its 2019-20 Budget proposal to extend the bring forward age limit so that anyone under age 67 can access the bring-forward rule from 1 July 2020. The proposed legislation for this is yet to be passed by the Senate.

The Government also noted that the existing restriction on non-concessional contributions will continue to apply for people with total superannuation balances above $1.6m ($1.7m from 2021-22).

The residency requirements for self-managed superannuation funds (SMSFs) and small APRA-regulated funds (SAFs) will be relaxed by extending the central management and control test safe harbour from two to five years for SMSFs, and removing the active member test for both fund types.

The Government said the proposed changes to the residency requirements will allow SMSF and SAF members to continue to contribute to their superannuation fund whilst temporarily overseas, ensuring parity with members of large APRA-regulated funds. It will also provide SMSF and SAF members with flexibility to keep and continue to contribute to their preferred fund while undertaking overseas work and education.

The measure will have effect from the start of the first financial year after Royal Assent of the enabling legislation, which the Government expects to have occurred prior to 1 July 2022.

The Superannuation Guarantee $450 per month eligibility threshold will be removed from 1 July 2022. As a result, employers will be required to make quarterly Super Guarantee contributions on behalf of such low-income employees earning less than $450 per month (unless another Super Guarantee exemption applies). Note that previously legislated increases to the SG rate will not change.

The minimum eligibility age to make downsizer contributions into superannuation will be lowered to age 60 (down from age 65) from 1 July 2022.

The proposed reduction in the eligibility age will mean that individuals aged 60 or over can make an additional non-concessional contribution of up to $300,000 from the proceeds of selling their home. Either the individual or their spouse must have owned the home for 10 years.

The Government will provide $21.2 million over four years from 2021-22 to improve the uptake of its Pension Loans Scheme (PLS) by:

From 1 July 2022, the Government will introduce a No Negative Equity Guarantee for PLS loans and allow people access to a capped advance payment in the form of a lump sum.

A No Negative Equity Guarantee will mean that borrowers under the PLS, or their estate, will not owe more than the market value of their property, in the rare circumstances where their accrued PLS debt exceeds their property value. This brings the PLS in line with private sector reverse mortgages.

Eligible people will be able to receive a maximum lump sum advance payment equal to 50% of the maximum Age Pension. Based on current Age Pension rates, this is around $12,385 per year for singles, while couples combined could receive around $18,670.

A maximum of two advances totalling up to the cap amount will be permitted in a year, for those who do not want to take an advance in one instalment. The measure will take effect from 1 July 2022.

The Budget confirmed that the maximum amount of voluntary superannuation contributions that can be released under the First Home Super Saver (FHSS) scheme will be increased from $30,000 to $50,000.

Currently, the FHSS scheme allows for future voluntary contributions up to $15,000 per year (and $30,000 in total) to be withdrawn for a first home purchase. To be eligible, a person must be 18 years or over, have not used the FHSS scheme before and have never owned real property in Australia. Withdrawals of eligible FHSS contributions (and associated earnings) are taxed at the individual's marginal rate less a 30% tax offset. Effectively, the scheme provides a 15% tax saving on money channelled via super for a first home purchase.

Other first home buyer measures, announced as part of the Budget, include: